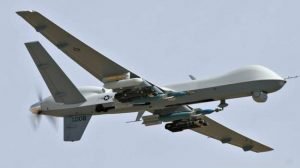 The officials further added that the aristrike was carried out around 3:00 pm local time, while the Taliban militants were looking to cross the border and enter Pakistan.

Several other Taliban militants were also reportedly killed following the drone strike which was carried out in Shegal district.

Kunar is among the volatile provinces in eastern Afghanistan where Taliban militants are actively operating in its various districts and routinely carry out insurgency attacks.