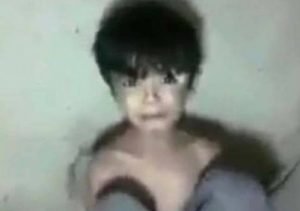 A disturbing video which purportedly shows a kidnapped a child has gone viral and is widely being shared in media since last week.

The video which apparently emerged for the first time a month ago, has started to catch attraction in media, specifically in social media during the recent days.

A bare child is shown in the video as he cries and makes to plea to her mother to rescue her.

According to reports, the child was kidnapped from the 3rd police district of Farah city and his captors have reportedly asked for a ransom of $100,000.

Identified as Naweed, the child was taken by the kidnappers nearly 40 days ago as he was standing in front of his house, his father Abdul Jalil said.

Kidnap for ransom cases still continue in parts of the country despite the Afghan intelligence nabbed two MAFIA bosses involved in major kidnappings who were later executed by the government.

The two top MAFIA leaders, Habib Istalif and Raees Khudaidad, were executed late in 2014 and early in 2015 after they were arrested by intelligence operatives.

In the meantime, a provincial council member was sentenced to death by a primary court in western Herat province of Afghanistan after he was found guilty of kidnappings and murder.

The provincial council member, Askar Anwari, was sentenced to death during a court hearing last month as he was present with his four other colleagues.