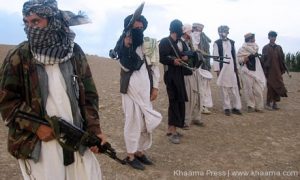 The Taliban militants launched another major offensive in north-western Ghor province of Afghanistan on Wednesday.

According to reports, around 300 Taliban militants have taken part in the offensive which led to fall of Sada district to Taliban control.

Khatebi further added that heavy clashes are still going on in the area and said there are no reports regarding the casualties so far.

The Taliban militants group has not commented regarding clashes so far.