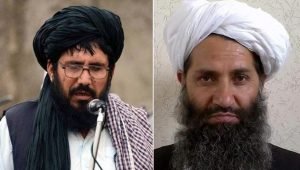 A new deadly infighting has erupted among the Taliban insurgents in western Herat province of Afghanistan, leaving nearly 50 people dead.

According to the local officials in Herat, the latest clashes took place between the supporters of Taliban supreme Mullah Hebatullah Akhundzada and dissident Taliban leader Mullah Mohammad Rasool.

Provincial governor’s spokesman Jilani Farhad confirmed the latest clashes have left around 40 dead from both the sides.

He said militants under the command of Mullah Samad loyal to Mullah Hebatullah and Mullah Nangialai who is loyal to Mullah Rasool, clashed in Khaifan area of Shindand district.

Clashes between the supporters of Mullah Hebatullah and Mulllah Rasool have not been rare but numerous such incidents have taken place in the past well.

Mullah Rasool is a dissident Taliban leader who has been leading his own faction of the Taliban after the death of the group’s founder and former supreme leader Mullah Mohammad Omar.