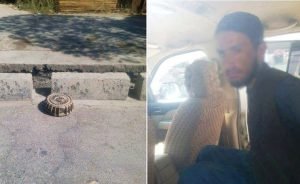 A deadly bombing plot by the anti-government armed militants was foiled by the Afghan National Defense and Security Forces (ANDSF) in a populated area of Kabul city.

Security sources said a suspect was arrested as he was trying to plant an Improvised Explosive Device (IED) in Gozargah area of the city.

The sources further added that the suspect was arrested by security personnel belonging to the Afghan Public Order police forces.

This comes as the security forces thwarted a major attack plot by the anti-government armed militants in another populated area of the city few days ahead of Eid.

The explosives were seized from Haji Yaqoob area of the city before the militants manage to detonated it.

Earlier, at least 33 people were killed and over 80 others were wounded in a twin suicide attack in the outskirts of the city.

The anti-government armed militant groups have been attempting to increase attacks main cities of the country, including capital Kabul.

The Taliban group has vowed to carry out more attacks as they announced their spring offensive earlier in the month of April.