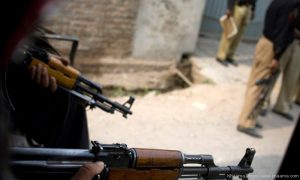 At least 22 Pakistani security personnel were reportedly killed and 30 others were injured following a deadly explosion in Pakistan’s Khyber Pakhtunkhwa province on Sunday.

According to the local officials, the blast took place early Sunday morning in Cantt area of Bannu district after a convoy of the Pakistani security personnel was attacked by a remote controlled improvised explosive device.

A TTP spokesman, Shahidullah Shahid said that such attacks on Pakistani security personnel will continue.

A senior security official speaking on the condition of anonymity, said emergency and security forces reached the area and the injured security personnel were shifted to the CMH for medical aid.

The official told AFP that soldiers and paramilitary Frontier Corps were preparing to leave Bannu, Khyber Pakhtunkhwa province, for Razmak in North Waziristan when their convoy was rocked by the blast.

Local officials fear that the death toll may rise as the health condition of a number of the security personnel are critical.

In the meantime, rescue sources reported 15 people dead in the bombing and said the blast was suspected to have been carried out by a suicide bomber.

Those killed in the attack included civilians and security forces personnel, the rescue officials added.