Deadline unextendable for swearing-in ceremony of next Afghan leader: Karzai 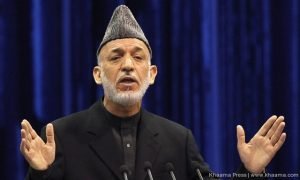 Afghan President Hamid Karzai has said that the deadline for the swearing in ceremony of the next Afghan president is unextendable and oath taking ceremony should be held on 2nd September.

The Presidential Palace media office said Saturday that the issue was shared during a meeting between President Hamid Karzai and UN special envoy for Afghanistan Jan Kubis.

The oath taking ceremony was due to be organized on 2nd August but it was rescheduled following requests by presidential candidates and United Nations Assistance Mission in Afghanistan.

The agreement to extend the swearing-in ceremony was reached following US Secretary of Sate John Kerry’s visit to Afghanistan to resolve the political crisis due to election deadlock.

In the meantime, Jan Kubis briefed the Afghan president regarding the ongoing audit process of runoff presidential vote and said the Independent Election Commission (IEC) was urged to further accelerate the audit process.