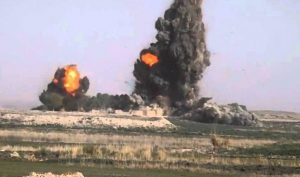 Conflicting reports emerge regarding a deadly airstrike in northern Kunduz province as dozens of people are feared dead.

The military officials are saying that a deadly airstrike targeted the leadership council members of the Taliban group in northern Kunduz province of Afghanistan.

The 20th Pamir Division of the Afghan Military in the North said the airstrike was carried out at around 11 am local time today.

The source further added that fifteen people including a key leadership council member of the Taliban Mawlavi Beryani was among those killed.

According to the 20th Pamir Division, at least ten insurgents were also wounded during the airstrike conducted by the Afghan Air force.

In the meantime, a spokesman for the 20th Pamir Division Ghulam Hazrat Karimi said the airstrike was carried out as a large gathering was underway to plan the future attacks of the group in this province.

On the other hand, reports indicate that the airstrike was carried out a religious seminary and more than 25 people have been killed.

According to the unconfirmed repots, around 200 people were present in the seminary when the airstrike took place and there are fears that some civilians have also been killed.