Commitment to Afghanistan will only deepen after January 20: US 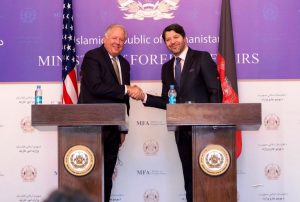 A top diplomat visited Afghanistan to reaffirm Washington’s continued support to Afghanistan as the Obama administration ends on 20th January.

“First as the administration of President Obama nears an end, it was important for a senior U.S. government official to come to Kabul and to underscore our appreciation and our gratitude to the Government of Afghanistan and to the people of Afghanistan for the tremendous cooperation and partnership that we have been able to build over eight years of this administration,” Under Secretary of State Thomas Shannon said Saturday.

Shanon further added “But secondly to underscore — that as a career member of the U.S. diplomatic service — that our commitment to Afghanistan does not end on the January 20 — quite the contrary, it will only deepen — and that the strategic importance of this relationship is evident to all. But the tremendous possibility and opportunity that exists as we look into the future will become apparent in how we engage in Afghanistan. “

“And so, I can assure you that our purpose and intention here is enduring; it is sustainable and it is long term. The alliance that exists between the people of Afghanistan and United States and our two governments is an important one and an enduring one — so I thank you for that,” he added.

According to Shanon, Afhganistan and US share important bonds of friendship and together are going to find ways to improve the lives of all of our citizens.

“I’d just like to close by thanking President Ghani and Chief Executive Abdullah for seeing me earlier today, but also to thank the Afghan security forces and the Afghan people for the commitment that they have shown to ensuring that Afghanistan never again serves as the safe haven for terrorists — but also to underscore the enduring friendship that exists between our two peoples,” he said.