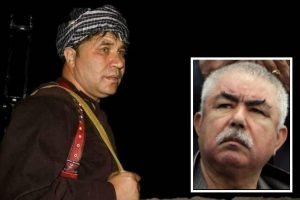 The First Vice President General Abdul Rashid Dostum has warned of dire consequences over the arrest of a top commander of Junbish Milli party.

In a statement posted online, Gen. Dostum claimed that Commander Nizamuddin Qaisari has been arrested based on incorrect tip off.

Gen. Dostum further added that Commander Qaisari has become a victim of conspiracies and warned that his arrest would result into the collapse of the frontline against the enemies of the country in Faryab.