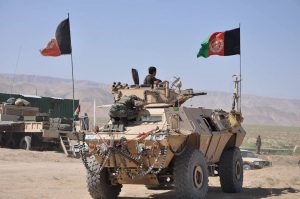 At least twenty two militants were killed or wounded during the clashes in northern Balkh province of Afghanistan, the Afghan army officials said late on Monday.

According to the officials of the 209th Shaheen Corps, the clash took place in the vicinity of Chahar Bolak district of Balkh province between the Afghan armed forces and the Taliban insurgents.

The officials further added that seven militants were killed and five others were wounded during the clashes that took place in the vicinity Salbaroon, Khwajah Roshnayi, and Samochak villages.

Balkh is among the relatively calm provinces in North of Afghanistan where fewer insurgency related incidents have been reported since the fall of the Taliban regime and during the recent years.

But the anti-government armed militant groups are attempting to expand their insurgency in this province as the security situation in certain Northern provinces has started to deteriorate.

In the meantime, the Afghan national defense and security forces are busy conducting counter-terrorism operations in northern Balkh and other key northern provinces to suppress the insurgent groups and prevent them from expanding foothold in the North of the country.