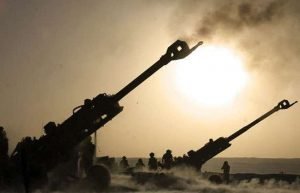 A number of civilians were wounded in eastern Kunar province during the latest wave of artillery shelling from the other side of Durand Line, the local officials said Tuesday.

Provincial police spokesman Faridullah Dehqan confirmed that nearly 300 rounds of artillery shells have landed in three districts of Kunar province in the past 24 hours.

According to Mosamim, the artillery shells landed in three districts of Kunar including Dangam, Shiltan, and Sarkano districts.

However, another security official says at least five civilians have been wounded during the latest shelling and hundreds more have been force to abandon their homes.

This comes as Mr. Dehqan said Monday that more than 150 rounds of artillery shells landed in Shiltan and Dangam districts during the latest wave of the shelling.

He also confirmed that the shelling has not inflicted any casualty on the local residents but the has caused property damages.

The local officials said last week that more than 100 artillery shells have landed in various parts of Dangam district in the past 24 hours.