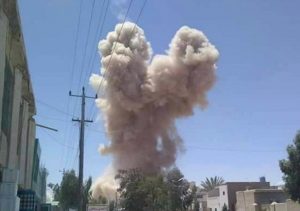 At least five civilians were killed or wounded in an Improvised Explosive Device (IED) explosion in southeastern Ghazni province of Afghanistan.

The 203rd Thunder Corps of the Afghan Military in the southeast in a statement said the incident has taken place in the vicinity of Moqor district.

The statement further added that a Toyota Corolla type vehicle struck an IED planted on a roadside in Chahardehi area of the district, leaving two civilians dead and three more wounded.

The Taliban militants and other militants including ISIS often use improvised explosive device as the weapon of their choice to target the security forces and government officials.

However, in majority of such attacks the ordinary civilians are killed while in some cases the Taliban militants are themselves blown up in premature explosions.

Anti-government elements must immediately end the indiscriminate and disproportionate use of all improvised explosive devices (IEDs) in areas frequented by civilians, said UNAMA in a special human rights report released few weeks earlier.

The special report – titled “Increasing Harm to Afghan Civilians form the Deliberate and Indiscriminate Use of Improvised Explosive Devices” – documents a sharp increase from 1 January – 30 September 2018 in the killing and maiming of Afghan civilians by IEDs, which have caused almost half of the civilian casualties from conflict-related violence.