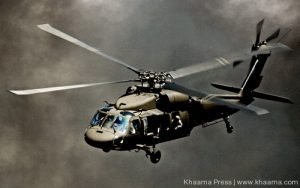 According to local officials, the plane has crashed in the Shahjoi district of Zabul province due to inconvenient weather or some technical fault and there has been no enemy activity in the area.

ISAF has issued a statement confirming the incident and saying that the issue is under investigation.

This comes as a Turkish helicopter made an emergency landing last Thursday in Azra district of Logar province where all nine crew were taken by Taliban militants.

In another incident a large number of US helicopters have been damaged following a heavy hailstorm in Kandahar airfield on 23rd April.

ISAF did not give a specific number, but a service member in Kandahar Airfield speaking on the condition of anonymity said around 50 helicopters have suffered significant damages.