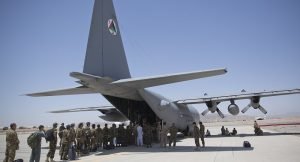 China is due to hand over two transport planes to the Afghan Air Force months after the Afghan National Defense and Security Forces (ANDSF) received the first batch of military aid from the country.

Officials in the Ministry of Defense of Afghanistan (MoD) have said the planes will be used for the transportation of the Afghan army officials and delegates.

MoD spokesman Dawlat Waziri said the delivery of the planes will play a key role as the Afghan Air Force needs the planes for the transportaion of the army officials on official trips inside and outside the country.

No further details were given regarding the exact date of the delivery of the planes and the type of the aircraft China would deliver to the Afghan army.

Afghanistan received the first batch of military aid from China earlier in the month of July which followed as the country has been attempting to increase role in supporting in Afghanistan amid deteriorating security situation.

Gen. Fenghui also added that China will call a regional summit to implement the proposal by President Ghani during Shanghai conference for fight against terrorism.

Reiterating China’s commitment to fight terrorism in the region, Gen. Fenghui said Afghanistan is located in a strategic location and acts as an important economic belt, which is continuously threatened by the terror groups.