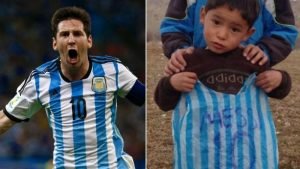 The Argentinian football star Lionel Messi’s biggest and youngest fan from Afghanistan Murtaza Ahmadi has been forced to abandon Afghanistan months after he charmed the internet with plastic bag shirt.

According to reports, Murtaza was forced to seek refuge in the neighboring Pakistan amid deteriorating security situation and fears of kidnapping.

In an interview with BBC Urdu, Murtaza has said he still loves Messi and is keen to meet him but his family members have said the Afghanistan Football Federation promised to arrange a meeting for his son with the football star but nothing happened afterwards.

Meanwhile, reports emerged earlier last month suggesting that Murtaza will not meet the star with a source in Leo Messi Foundation saying “The meeting is not taking place. We get thousands of requests from children all over the world and the truth is that we cannot cover them all.”

“We’d like to but it’s impossible,” the sources told the UK-based MailOnline newspaper.

However, Murtaza’s dreams were partially achieved last month after he received signed shirts from the football star.

Murtaza hails from Ghazni, a restive province located in southeastern part of Afghanistan. The original photos of Murtaza wearing the plastic shirt was taken by his elder brother Hamayon who published them on his Facebook page.