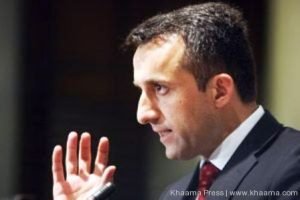 The former Afghan Intelligence – National Directorate of Security (NDS) chief Amrullah Saleh said Monday that certain countries are planning to break up Afghanistan in two parts by sparking divisions among Afghans in North and South.

The head of the Green Trend Movement was speaking during the signing of an agreement with Sulaiman Cultural Society and Noor Social Trend from southeastern Paktika and Paktiya provinces.

The agreement between the three movements is aimed at launched joint campaigns to thwart the conspiracies to split Afghanistan.

Saleh promised to stand against all conspiracies to split the nation and insisted that any other flag apart from the national flag of Afghanistan would mean to create divisions among Afghans in a bid to break up the country.

Without naming any specific country Saleh said “all those internal and external groups dreaming to create divisions among Afghans and once again spark civil war, are invalid, since we were one nation and will remain as one nation.”

He said the foreign countries are following their specific interests in breaking up Afghanistan, although he did not elaborate further regarding the targets of the countries looking to break up Afghanistan.

Saleh also insisted that the new generation of Afghanistan will never agree to break up the country, with Sulaiman Cultural Society chief Asifullah Ikhlas saying the main purpose of the agreement is to unite the young generation fo the country and eliminate discrimination.

3 thoughts on “Certain countries planning to break up Afghanistan in two parts: Saleh”