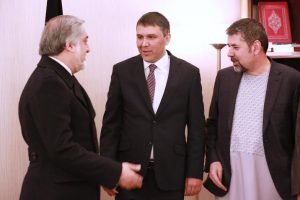 Gen. Andarabi was previously serving as Deputy Director of Operations of the National Directorate of Security (NDS).

NDS in a statement said Gen. Andarabi was appointed as acting NDS chief through a presidential decree on Thursday and and formally assumed charge of NDS during a ceremony attended by CEO Abdullah.

Speaking during the ceremony to introduce Gen. Andarabi as acting NDS Chief, Abdullah said the acceptance of Rahmatullah Nabil’s resignation was not an easy task during the current situation but he said the government respects the right and decision of the security official to step down.

Major General Mohammad Massoud Andarabi been working as a DDO for NDS, has higher education in Management and Information Technology, according to the bilgraphy of Gen. Andarabi released by NDS.

Gen. Andarabi has been working in higher level of NDS as Deputy Director of Operations, he provided efforts during his career to protect national interests and shattered any kind of threads which posed Afghanistan’s national security he provided lots of achievements for NDS.

One of the co-founders of the Taliban and head of the promotion of virtue and prevention of vice...