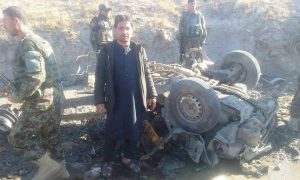 A deadly car bomb attack was foiled in eastern Nangarhar province of Afghanistan a day after an explosion ripped through a funeral ceremony in this province leaving at least eighteen dead.

The provincial government’s media office in a statement said a Vehicle-borne Improvised Explosive Device (VBIED) was discovered and detonated in Khogyani district.

The statement further added that the militants were looking to use the car bomb to target the security forces during the operations.

In another operation, the Afghan security forces discovered eight mortar rounds from Sari Kala area of the district.

Nangarhar is among the relatively calm provinces in East of Afghanistan but the anti-government armed militant groups including the ISIS militants are attempting to expand their insurgency in this province lately.

This comes as an explosion took place on Sunday in Behsud located on the outskirts of Jalalabad city, the provincial capital of Nangarhar.

Provincial governor’s spokesman Ataullah Khogyani said the explosives were planted inside a Rickshaw vehicle and was detonated as a burial ceremony was underway in a cemetery.

Khogyani further added that twelve people were also wounded in the attack and there are concerns that the death toll will further rise as some are in critical condition.