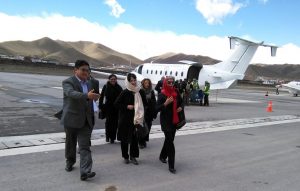 The Canadian and Aga Khan Development Network envoys have pledged continued support to the central Bamyan province of Afghanistan.

The two envoys reaffirmed commitments during a visit to the central Bamyan province where they met with the local officials including provincial governor Mohammad Tahir Zahir.

According to the provincial government media office, the Canadian Ambassador Deborah Lyons and the ambassador of his highness prince Karim Aga Khan to Afghanistan Nurjehan Mawani discussed development projects in Bamyan province with the local officials.

She mainly focused on the construction of Mullah Ghulam and allocation of land for the installation of solar power in a bid to help the work of the hospital.