IEA reacts to Joe Biden remarks over disunity in Afghanistan

We reopen schools as it is our responsibility not world pressure: IEA Minister 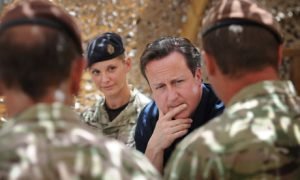 British Prime Minister David Cameron is due to announce end of Britain’s role in Afghanistan war after announcing a major reduction in the number of combat troops by the end of next summer.

According to reports the prime minister will announce to reduce at least 4,500 troops from the Afghanistan which will be more than half of the British troops deployed in Afghanistan.

Around 500 troops will leave by the end of this year as Britain and its Nato partners begin discussing the number and type of troops that should remain in Afghanistan when foreign soldiers depart at the end of 2014, The Daily Telegraph reported.

But the Prime Minister will avoid offering a precise timetable for withdrawal, amid tensions between politicians and defence chiefs over how rapid the scaling down should be.

Commanders have long maintained that Nato’s advances – the term success is no longer used – against the Taliban remain “fragile and reversible” and serious doubts remain over the capability of the Afghan National Security Forces (ANSF).

Senior commanders believe that drawing down troop numbers too quickly could endanger the lives of those British forces remaining in Helmand and, in the worst case scenario, derail the entire exit strategy.

The decision on the details of the announcement is expected to be made at Tuesday’s meeting of the National Security Council (NSC), made up of senior ministers, civil servants and military leaders, which is set to discuss troop reductions in Afghanistan.

In the meantime Australia’s former ambassador to NATO Brendan Nelson says it would be irresponsible to immediately pull out of Afghanistan and leave the ongoing security task to the United States and other coalition forces.

Dr Nelson, who on Monday officially took over as the new director of the Australian War Memorial, was asked about suggestions Australia immediately bring home its troops from the war torn nation.

While Afghanistan would likely never be a Jeffersonian democracy, Dr Nelson said it was on track to becoming a relatively stable, albeit still poor nation.

‘But to simply say to we will leave Afghanistan to the Americans and the British and a handful others is not only delusional, it’s irresponsible,’ he told AAP in an interview.

‘For those who may not think too carefully about it, of course it’s very tempting to say we should leave. But it’s much more complex than that.’

The coalition forces’ planned transfer of domestic security responsibility to the Afghan government is due to conclude at the end of 2014.

Australian troops are expected to progressively withdraw in 2013 and the following year.