Kabul police: attack on parliament over, all attackers killed 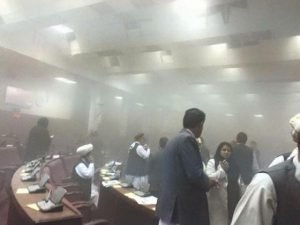 Kabul police say the attack on parliament compound has been ended with all attackers killed.

Sediq Sediqi, spokesman for the Ministry of Interior security forces stated in a tweet that no MPs was wounded in the attack.

Ministry of Interior has not yet released a specific number of fatalities suffered in the attack.

However, controversial reports suggest that at around 40 people have been killed and wounded in the attack.

The attack began with a Vehicle-Borne Improvised Explosive Device VBIED explosion in front of the front gate of the parliament around 10:30 am today.

Following the explosion other militants started a gun battle with security forces and firing from a near by under construction building.

Soon after the attack additional security forces to include special forces arrived and cordoned off the area.

Kabul Police say all militants who were firing at the parliament have been killed by the security forces.

A dust blanket was visible in the parliament following the car bomb detonation and MPs left the session.

Kabul Police also say that lawmakers and journalists from inside the building were moved to a save location.

The attack took place as the nominated defense minister of Afghanistan Mohammad Masoum Stanikzai was going to be introduced to parliament.

Taliban have claimed responsibility for the attack.

3 thoughts on “Kabul police: attack on parliament over, all attackers killed”