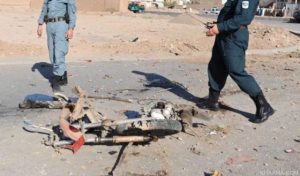 Qais Qaderi, spokesman for active governor of Kapisa says an explosion occurred in front of the provincial police headquarters that injured 3 policemen and 2 shopkeepers this morning.

He added that the explosives were placed in a motorcycle and the apparent target was the police.

He added that the injured were shifted to the hospital where they were announced out of danger.

This was the fourth explosion in the country till 02:00PM Thursday. Before Kapisa’s explosion there were two explosions in Baghalan province which luckily did not have casualties but before that a suicide attack in Kabul martyred a policeman and injured 3 others.