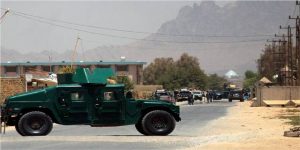 Two policemen and one civilian were wounded when a motorcycle parked on a road side exploded in Panjwaee district of southern Kandahar province on Sunday.

Provincial police headquarters confirming the explosion says it took place in Aslam Agha Jan area of the district around 01:00 O’clock today that injured two policemen and one civilian.

No groups claimed responsibility for the attack but officials blamed Taliban insurgents for it.

One was defused in Mushan area of Panjwaee district, another defused in Khakriz district and 25 in Mya Nashim district.

Police are still conducting investigation into the incident.

Kandahar province is a birth place of Taliban in the country’s south which is surrounded by Zabul, Uruzgan and Helmand province.

Reports indicate that insurgents cross border between these provinces for terrorist activities occasionally.

Black clothes and flags usually refer to Islamic States of Iraq and the Levant (ISIL) also known as IS or DAESH.

Omar Zwak Governor’s spokesman for Helmand province turned down the report but Zabul police headquarters confirmed the arrival of new groups to parts of their province.