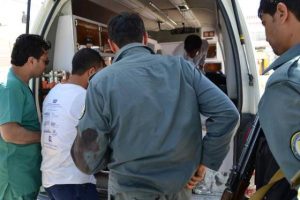 Ten people were killed and around 70 others wounded in today’s attack at the office of appellate attorney in Mazar-i-Sharif, provincial capital of northern Balkh province.

Police say there is no resistant now and that all attackers have been killed.

A group of insurgents who were wearing military uniform stormed the office of appellate attorney in Mazar-i-Sharif this morning and started to exchange fire with security forces.

At least three huge explosions were also heard from inside the building during the attack.

The area was cordoned off by the security forces and ambulances reached to the area for assistance.

Hospital sources confirmed that ten people were killed and around 70 others wounded in the attack.

According to security officials, four soldiers including the police chief of 6th police district of Mazar-i-Sharif, three civilians and three attorneys comprise the ones killed. And the ones wounded are civilians, soldiers and attorneys.

Taliban insurgents have claimed responsibility for the attack.

Atta Mohammad Noor, governor of Balkh province and U.S. embassy in Kabul have condemned the attack.