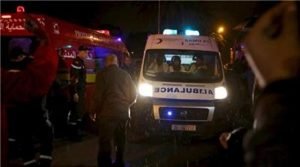 Tunisia’s President Beji Caid Essebsi said in an address to the nation aired by local TV channels that the country was at war against terrorism and called for international cooperation against extremists who have staged attacks across the world in recent weeks. “I want to reassure the Tunisian people that we will vanquish terrorism,” he said.

A state of emergency throughout the country for 30 days and curfew in the capital has been announced.

The bomb exploded at a bus stop located on Avenue Mohamed V, near the 7 November clock tower, where the bus picks up and drops staff.

No group has immediately claimed responsibility for the attack but Tunisia has been targeted by the Islamic State (IS) in the past.

An IS-claimed attack left 38 tourists killed at the Sousse beach resort In June following the March attack that left 21 people killed at the Bardo Museum in Tunis.

The Satanic Verses author Salman Rushdie, 75, was attacked on stage in New York, on Friday and is...

Pakistan Snubs Russian Wheat to Save $1.4M amid Food Scarcity