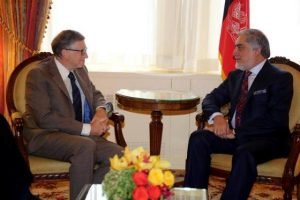 A statement issued by the office of Chief Executive Officer (CEO) Abdullah Abdullah on Sunday states that Gates praised the efforts of the government in fight against the polio virus but hoped that the National Unity Government would take more strict actions against it.

The statement further states that CEO Abdullah Abdullah reiterated government’ resolve to Gates regarding the fight about polio and other deadly diseases.

CEO Abdullah urged Gates to expand his activities in Afghanistan and assist the Ministry of Public Health in eradication of deadly diseases.

This comes as The World Health Organization (WHO) said Nigeria and Africa as a whole are now closer to being certified polio-free.

It warned that polio remains endemic in Afghanistan and Pakistan and that as long as the disease exists anywhere “it’s a threat to children everywhere”.