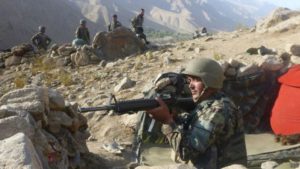 The district was under Taliban control for about two weeks. It was ran over by hundreds of Taliban insurgents armed with light and heavy weapons on 6 June.

Sediq Sediqi said 120 insurgents have been killed during these operations including six commanders of the group.

A Tajikistani is among the militant commanders killed in the operations.

He said 20 foreigners were among the insurgents killed in these operations.

Frotan further said that civilians have not suffered casualties during these operations but five soldiers embraced martyrdom and 10 others wounded.

“Security forces are now considering military operations in Khastak valley and Juram Distric since the Taliban from Yamgan District have fled to these locations,” Frodan added.

Shah Waliullah, the acting governor of Badakhshan province had earlier told Khaama Press that Khastak valley has become a safe haven of militants from where they plan attacks.