Balkh issue to be resolved within the framework of Afghan constitution: Ghani 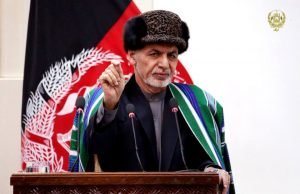 President Mohammad Ashraf Ghani says the issue of the Balkh political leadership will be resolved within the frameworks of the constitution of Afghanistan.

Speaking to elders and residents of northern Balkh province in ARG Palace on Wednesday, President Ghani said all steps regarding Balkh political leadership have been taken in accordance with the constitution of Afghanistan and the issue will be resolved within the framework of the constitution of the country.

He vowed to bolster the system by strengthening the rule of law and justice, insisting that no one has the right to stand against the national interests of the country and the decisions should be taken based on democratic values and approaches.

This comes as a deadlock still persists between Noor and the government over the controversies surrounding his dismissal from the Balkh government.

The Office of the President, ARG Palace, announced more than a month ago that President Ghani has approved the resignation of the Balkh governor Ata Mohammad Noor.