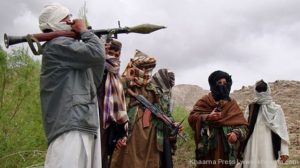 Militants armed with heavy and light weapons launched a coordinated attack on this district from several angles yesterday and ultimately captured the it.

Sakhi Dad Haidari, Deputy Police Chief of Badakhshan said due to bad weather conditions, reinforcement did not arrive to Yamgan on time.

The district was overrun by Taliban in June but after about two weeks they were pushed back and government forces retook control of the seized areas.

Sediq Sediqi, spokesman for the Ministry of Interior said 120 insurgents, including six commanders among them a Tajikistan national, were killed in the operation.

Yamgan is bordering Wardouj and Dara-e-Khastak districts where reportedly Taliban have a strong presence and from there they plan attacks on other areas of Badakhshan.

Afghanistan Ministry of Foreign Affairs has said that an Afghan delegation led by the acting foreign...