Help us in returning IDP’s: Taliban to Intl-Community 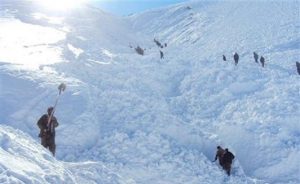 Officials add that these people died after they got trapped in the avalanche fall.

Officials further add that due to the heavy snow fall, rescuers could not even remove the dead bodies.

Elsewhere in Yamgan District around 20 homes have been destroyed due to the heavy snowfall.

No loss of human lives has been reported but dozens of domestic animals have died in snow-related incidents.

The heavy snow-hit area is reported to be Khash area of Yamgan District.

Badakhshan is one of the remote provinces of Afghanistan located in the north-eastern part of the country.

Badakhshan witnesses some heavy snowfall every winter which claim dozens of lives most of the years.

In 2012 more than 60 people died due to heavy snowfall in Badakhshan province with more than 40 died only in Shekay District.

In the snowing season some of the roads in Badakhshan Province are closed for months.

Head of the European Union Urela Von Der Leyen said that the union of 27 European states is standing...

Chief of Army Staff of the Taliban Fasihudin said that they will suppress all who defend the gains...

A local radio named MILMA ended its ten years of journey in southeastern Paktika province and was...