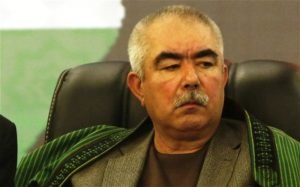 The first vice president of Afghanistan General Abdul Rashid Dostum condemned the attack on Shamshad TV station in Kabul, calling it an act against humanity and direct attack on the Afghan people.

The office of the first vice president in a statement said the Taliban and ISIS terroris group have reaffirmed their opposition to freedom of speech in the country.

He also added that he is hopeful that the security institutions will step up efforts to ensure security of the people as well as media and prevent such incidents in the future.

A group of insurgents launched a coordinated attack on the TV station at around 11 am local time on Tuesday.

According to the security officials, a suicide bomber initially detonated his explosives near the entrance of the TV station while the remaining insurgents started clashes with the security forces.

The security officials are saying that at least one person was killed and around twenty others were wounded in the incident.

It is believed that the loyalists of the Islamic State of Iraq and Syria (ISIS) terrorist group have claimed responsibility behind the incident.