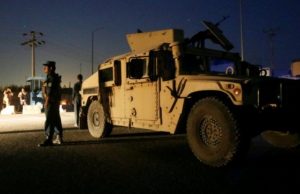 A coordinated attack followed by a massive explosion has ended with the elimination of all three terrorists, the security officials confirmed.

Sediq Sediqi, spokesman for the Ministry of Interior, confirmed that three terrorists involved in the attack on Northgate in Kabul have been gunned down.

He said the police forces have started assessing the casualties.

In the meantime Kabul police chief Gen. Abdul Rahman Rahimi said the hotel residents who are mainly foreigners did not suffer any casualties in the attack.

The attack on Northgate was launched around 1:30 am local time after a Vehicle-borne Improvised Explosive Device (VBIED) was detonated near the hotel compound.

The Taliban group claimed responsibility behind the attack and said heavy casualties have been incurred to residents of the compound.

According to reports, the attack has incurred extensive damage to the hotel compound as well as the nearby properties.

This was the second major attack that rocked Kabul city within the past ten days which comes days after July 23rd deadly attack that left at least 80 people dead and over 200 others wounded.

The Islamic State of Iraq and Syria (ISIS) terrorist group claimed responsibility behind the attack on peace protesters in Deh Mazang.