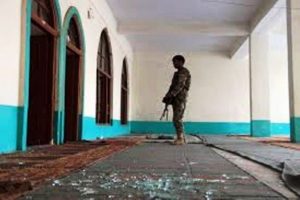 At least seven people were killed and two others were wounded after a group of armed men attacked a mosque in the vicinity of Shindand district.

The local officials are saying the incident took place at around 1:30 pm local time after a group of armed men opened fire on prayer participants.

District security chief Abdul Wakil Watanyar confirmed the incident and said at least seven people were killed and at least two others were wounded.

He said the gunmen managed to flee the area after the attack and a search operation and investigations into the incident are underway.

In the meantime, another local official says at least seven people were killed and at least six others were wounded in the attack.

Herat has been among the relatively calm provinces in West of Afghanistan but the security situation of the province has started to deteriorate during the recent years.

The anti-government armed militants including Taliban insurgents are active in some remote parts and districts of the province and often carry out insurgency and terrorist related activities.