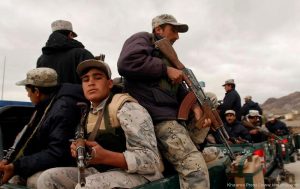 According to local authorities in southern Kandahar province of Afghanistan, at least 11 Afghan border protection police officers were killed in Taliban militants attack.

Taliban group claimed responsibility behind the incident. Qari Yousuf Ahmadi, a spokesman for the Taliban group said at least 15 Afghan soldiers were killed following the attack.

In a separate incident in Zherai district, at least AFghan local police officers were killed after a member of the ALP opened fire on his comrades.

A local security official speaking on the condition of anonymity said the assailant militant who had recently joined ALP forces, managed to flee the area after carrying out the attack.