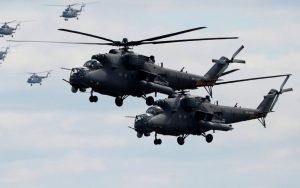 The National Security Adviser Mohammad Hanif Atmar is due to visit Russia in the near future to discuss Moscow’s support to the Afghan National Defense and Security Forces (ANDS) besides holding talks on other issues of bilateral interest.

The Office of the National Security Adviser has said Atmar will hold talks with the Russian officials regarding the supply of military equipment to Afghan forces.

Tawab Ghorzang, spokesman for National Security Adviser, has said the specific needs of the government of Afghanistan will be shared with the Russian officials during Mr. Atmar’s visit to Moscow.

No further details have been given regarding the exact date of Mr. Atmar’s visit to Russia.

This comes as the Russian officials earlier said the Afghan government is thinking to purchase aircraft and other military equipment from Russia.

Karzai during his meeting to Moscow nearly two weeks ago said “We sent a request to the Russian Security Council for expanding cooperation [in the military field], including for the deliveries of helicopters to Kabul.”

In the meantime, the Afghan and Russian defense officials agreed to establish a military-technical cooperation committee nearly two months ago in a bid to jointly combat international terrorism.

The Ministry of Defense officials in Kabul confirmed that a meeting was organized between the Afghan and Russian officials to discuss military cooperation between Kabul and Moscow.

The meeting was organized on the sideline of the 5th International Security Conference in Moscow late in April which was attended by over 500 politicians and military leaders of the world.