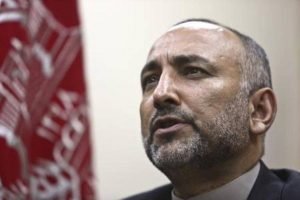 The Afghanistan’s National Security Advisor Mohammad Hanif Atmar says the country is facing a sensitive situation as he sought national support to government during a meeting with the Afghans based in Washington.

The Office of the National Security Council (ONSC) in a statement said Mr. Atmar discussed government’s peace offer, fight against terrorism, efforts to bolster the Afghan Air Force, growing regional support for the peace efforts, and some other issues during his meeting at the Embassy of Afghanistan.

He called the country’s situation as sensitive and emphasized that a national support to the government and the current system is key to overcome the situation.

According to Armar, the Afghan people should increase their support to the government considering the regional situation.

The Office of the National Security Council also added that Mr. Atmar met with a number of senior US government officials in the Afghan Embassy in Washington.

During his meeting with the top civilian and military officials, Atmar discussed the peace offer to Taliban, efforts to attract regional support in the peace process, Pakistan’s stance, fight against terrorism, and the upcoming elections, the statement said.

According to the National Security Council Office, Mr. Atmar expressed optimisms regarding the future of the country but emphasized more work is needed while insisting on regional and international cooperation.

He also added that the new US strategy for South has proven to be beneficial for the region and called for more bilateral cooperation between Afghanistan and the United.