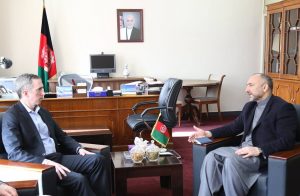 Mohammad Hanif Atmar told US’s Under Secretary of Defense for Intelligence Marcel Lettre on Monday that his country has played a key role in suppressing terrorism in Afghanistan and the region.

However, he expressed concern over the raise of the phenomenon.

“At the time, the threat of terrorism is increasing in the region and the world, Air Force of Afghanistan needs further training and equipment from the United States.” Atmar said.

He added that Afghanistan is ready to prepare a list of its needs and submit it to the United States.

The DoD official assured Atmar about his country’s continued support with Afghanistan.

Lettre said the United States supports policies of the government of Afghanistan for peace and stability and in the meantime it will consider further equipping Afghan Air Force.

One thought on “Atmar: Afghan Air Force needs more support from the U.S.”