At least 11 dead, wounded in coordinated explosions in Kabul 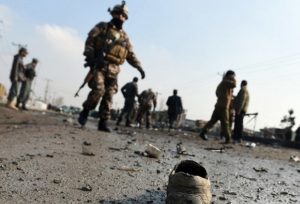 At least eleven people were killed or wounded after coordinated explosions targeted the security personnel in capital Kabul earlier today.

A spokesman for the Kabul Police Commandment Basir Mujahid confirmed the incident and said the explosions took place in the vicinity of 16th police district of the city at around 7:30am local time.

Mujahid further added that the first explosion took place due to an improvised explosive device planted on a roadside targeting a police vehicle and leaving one police officer dead.

He said the second explosion took place moments later when the security forces and civilians had gathered in the site of the incident.

According to Mujahid, the second explosion also left a security official dead and nine others wounded, including six policemen and three civilians.

No individual or group including Taliban militants has so far claimed responsibility behind the incident.