Around 100,000 people internally displaced in Kundoz because of violence 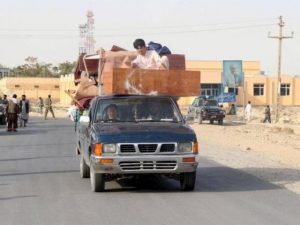 Minister of Refugees and Repatriation said during a press conference on Sunday that around 100,000 people have been internally displaced because of the situation in Kundoz.

Sayed Hussain Alimi Balkhi told reporters that around 20,000 families have left their homes in Kundoz and if each family has five members on average it is 100,000 people.

He said these people fled violence in their province to Balkh, Baghlan, Sar-e-Pul, Kabul and a few other provinces.

Balkhi further said that survey teams have been collecting information about those who have arrived in Kabul in order to assist them.

Minister Balkhi also provided information regarding his participation in UNHCR’s 66th meeting of the Executive Committee where member states pledged support for creating the conditions necessary for Afghan refugees to return to their country.

He said that Afghanistan’s issue was discussed in the meeting for two days where representatives from the United States, Europe, Africa, Pakistan, Iran and others agreed that Afghan refugees still need assistance.

European countries were urged to accept Afghan refugees who have arrived in Europe this year, Balkhi said, adding that a number of them might be accepted but it is also expected that some of them may not be accepted.