Army soldiers suffer casualties in an explosion in Kabul 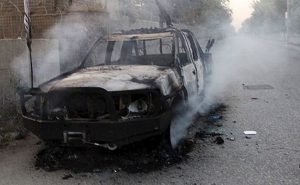 The soldiers of the Afghan National Army (ANA) suffered casualties in an explosion in capital Kabul late Sunday.

The sources further added that two army soldiers lost their lives in the explosion and two others sustained injuries.

In the meantime, a police official in Paghman district said the explosion was caused by an improvised explosive device planted on a roadside.

The official said the blast targeted an army vehicle on patrol, leaving two dead and three others wounded.

This comes as the anti-government armed militants have been attempting to carry out attacks in the key provinces and cities of the country including capital Kabul as part of their ongoing offensive against the government.

The anti-government armed militants including Taliban often use improvised explosive device as the weapon of their choice to target the security forces and government officials.