No casualties reported in second explosion in Kabul 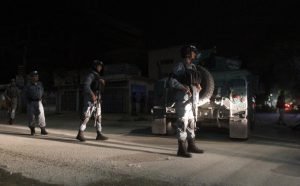 Another relatively heavy explosion has been heard in Kabul city earlier this evening, hours after a deadly attack left 64 dead and over 347 wounded.

The type of the explosion is not clear so far which has reportedly taken place in the vicinity of Shahr-e-Naw area.

A security official confirmed that an Improvised Explosive Device (IED) was planted inside a restaurant in Sherpoor area of the city.

This comes as at least 64 people were killed and 347 others were wounded after a suicide bomber detonated a vehicle packed with explosives in Pul-e-Mahmood Khan area of the city earlier today.

The explosion triggered gun battle between the Afghan security forces and the remaining militants who had taken position inside a compound used by the elite security forces.