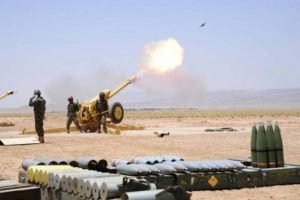 The Ministry of Defense (MoD) said the ANA artillery units pounded the hideouts of the Taliban insurgents in Waghez district of Ghazni.

MoD further added that 48 insurgents were killed in the artillery strikes and at least 28 others were wounded.

In the meantime, MoD said at least 5 insurgents were killed and 6 others were wounded in a similar operation in northern Kunduz province of Afghanistan.

According to MoD, the hideouts of the Taliban insurgents were pounded by the artillery units of the Afghan army in Gortapa area of Kunduz.

Both the northern Kunduz and southeastern Ghazni provinces are among the volatile provinces where the Taliban insurgents and militants belonging to the other insurgent groups are actively operating.

The Taliban insurgents frequently carry out attacks in Kunduz city and the group managed to take control of the strategic Kunduz city for at least two times.

A number of pro-Taliban women gathered in Kabul on Monday, January 17, 2022, and said that the Islamic...

Six months after the collapse of the Afghan government chaired by the former president, Mohammad...

A statement of the General Directorate of Intelligence (GDI) of the Islamic Emirate of Afghanistan...

Ministry of Defense of the Islamic Emirate of Afghanistan said that they have started delivering...