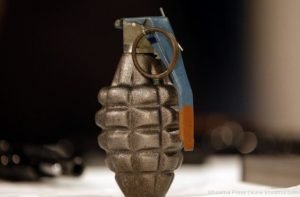 Shabir Ahmad, one of the four lecturers who survived a life attempt attack by a number of unknown gunmen in eastern Kapisa province of Afghanistan said various hand grenades and other explosive materials were fitted in their vehicle but they survived from the assassination plot.

He said they became aware of explosive materials presence in their vehicle while leaving the university compound and were on their way towards capital Kabul.

According to Alberuni University lecturer, Afghan police forces successfully defused the explosives from their vehicle after they were informed of the situation and the vehicle was parked in an safe area and free from civilians commute.

In the meantime Shabir Ahmad says that district governor for Esa-e-Awal district has reflected the report in a different scenario to media agencies, claiming that the explosives were planted by Alberuni university lecturers.

However provincial governor spokesman Qais Qaderi confirmed the report and said that the military attorney has launched an investigation in this regard.

Esa-e-Awal district governor quoted by provincial governor spokesman Mr. Qaderi claimed that the vehicle bombing plot was not real. He said, “We think that the scenario was not real considering the preliminary report which reflected the placement of bombs and explosives in the vehicle. The bomb defusal squad which reached the area to defuse the explosives called it a ridiculous act saying that the bombs were supposed to explode upon the opening of the vehicle doors.”

Meanwhile the question remains unanswered regarding the claims that the bombs were planted by University lecturers.

District governor for Esa-e-Awal district quoted by Kapisa governor spokesman said, “The university lecturers had made the unreal assassination plot in a bid to pave the way for their transfer to Kabul universities.”

But Alberuni university lecturer Shabir Ahmad says that a similar life attempt attack was carried out on them last year and unknown gunmen fired around six bullets on their vehilce and no suspect was arrested by security forces in connection to the incident so far. The incident was also confirmed by provincial governor spokesman.

Shabir Ahmad also denies having any personal issues with anyone or having any links with any political group or movement however he did not deny certain students involvement behind the incident who failed to qualify in examinations and were taken out of the university.

According to reports security officials in capital Kabul have also launched investigations to find out facts behind the incident after the incident was reported by Alberuni university lecturers.