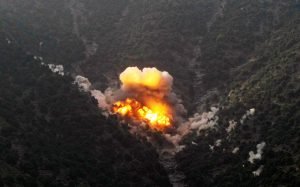 A series of airstrikes have been carried out on ISIS targets including a training camp of the terror group in eastern Nangarhar province of Afghanistan, leaving several militants dead.

The provincial government media office in a statement said Thursday at least six ISIS militants were killed in an airstrike conducted in Gorgori area of Haka Mina district during the counter-terrorism operations by the ground forces.

Teh statement further added that airstrikes were also carried out on ISIS training camp in Esta Karan and Gorgori areas, leaving ten ISIS militants as they were receiving training.

According to the governor’s office, airstrikes were also carried out on two ISIS compounds in Shabe area of the district, leaving at least five militants dead.

The security forces and the local residents did not suffer any casualties during the airstrikes which were carried out in the past 48 hours, the statement added.