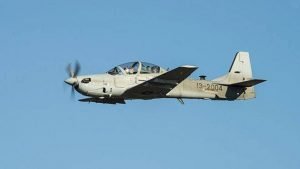 At least 5 Pakistani militants were killed in an airstrike in eastern Nangarhar province of Afghanistan late on Thursday night, local security authorities said.

The provincial police commandment in a statement said the airstrike was carried out by the Afghan forces in Kot district.

The statement further added that the 5 militants were fighting for the Islamic State of Iraq and Syria (ISIS) terrorist group and were targeted in Elyas Baba area.

Two of the militants hailed from Bajaur Agency and three others hailed from Orakzai Agency in the tribal regions of Pakistan, the statement.

The ISIS loyalists are actively operating in a number of the remote districts of eastern Nangarhar province including the restive Kot and Achin districts.

The Afghan National Defense and Security Forces (ANDSF) launched a major operation against the loyalists of the terror group nearly two weeks ago to eliminate their presence from the province.

The operations were launched amid concerns that the terrorists are attempting to expand foothold in the country with the coalition officials saying the loyalists of the terror group has direct links with the main group in Syria and Iraq.