Airstrike in Herat leaves 4 members of a family dead 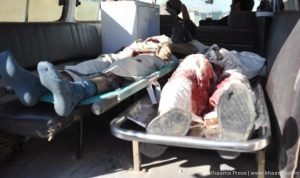 According to local authorities in western Herat province of Afghanistan, at least four civilians were killed following an airstrike in Shindand district late Monday.

Ahmadi further added that two men, a woman and child were among those killed following the airstrike.

Dozens of Shindand residents gathered near provincial government compound and protested against the civilian deaths, alleging that the airstrike was carried out by coalition forces.

Close relatives of the victims have said that two members of the same family survived the airstrike.

In the meantime, the NATO-led International Security Assistance Force (ISAF), said, ” We are aware of allegations regarding reported civilian casualties in Shindand District of Herat Province in the past 24 hours.”

ISAF following a statement said, “ISAF takes all allegations of civilian casualties very seriously, and is assessing the facts surrounding this incident. We are working hand-in-hand with Afghan authorities to resolve this as quickly as possible. We will release more information as appropriate.”