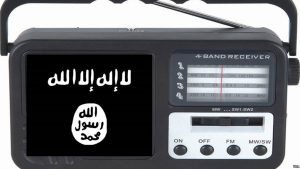 Four air strikes have been conducted in Achin District of eastern Nangarhar province in which a radio run by the terrorist group of the Islamic State (IS) has been destroyed and 29 militants killed.

Officials say the air strikes were carried out with the assistance of foreign forces in Mamand Dara area last night.

First air strike reportedly targeted the group’s radio station in which five operators of the radio were killed.

‘Voice of the Caliphate’ locally known as ‘Daesh Radio’ was also completely destroyed in the air strike.

It was airing propaganda programs against the government of Afghanistan and recruiting fighters for insurgency.

The radio was broadcasting propaganda programs from the past four months.

It started its programs in Pashto language but later launched Dari service as well to have more recruits.

Last night’s two air strikes targeted hideouts of the group in which 21 militants were killed.

The fourth one targeted internet system of the group. The system was completely destroyed and three of its workers killed.

Some of those killed in last night’s air strikes were important members of the group.