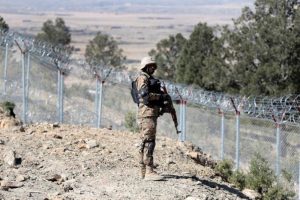 According to a statement released by Pakistani military, terrorists from across the border carried fire raids and physical attacks on Pakistan’s border posts and border fencing parties in Bajaur in KP and Qamar Din Qarez in Balochistan.

According to the Pakistani military, at least  4 soldiers of FC and one soldier of PAF (Deployed at observation post) got injured.

Pakistani officials claim that the groups belonging to Tehrik-e-Taliban Pakistan use the ungoverned areas in Afghanistan to stage attacks on its security personnel.

On the other hand, the Afghan officials are saying that the Taliban and Haqqani network leadership councils are based in the key cities of Pakistan, including Quetta, from where they plan and coordinate major attacks in Afghanistan.

Both Kabul and Islamabad deny the presence of organized sanctuaries of the terrorist groups in their soils.