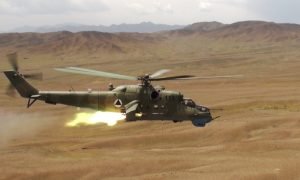 The Afghan national security forces have intensified air and ground operations against the fanatics loyal to the Islamic State of Iraq and Syria (ISIS) terrorist group in eastern Nangarhar province as the loyalists of the terror group are attempting to expand foothold in the country.

Gen. Murad told Radio Free Europe (RFE) during an exclusive interview that the public uprising forces are also supporting the Afghan national security forces to suppress the activities of ISIS loyalists in Nangarhar.

In regards to the deployment of terrorists by unidentified choppers in parts of Nangarhar province, Gen. Murad said they have not received concrete reports or evidences to prove the allegations.

The Afghan Air Force carried out its latest airstrike on ISIS fanatics in eastern Nangarhar province on Friday, leaving at least 14 loyalists of the terror group dead.

There have been growing concerns regarding the threats posed by emergent ISIS loyalists in Afghanistan with the US Secretary of Defense Ashton Carter saying late last year that the threat posed by the terror group is being tracked very closely as they have started creating ‘little nests’ in Afghanistan.

Meanwhile, the commander of the US and NATO forces in Afghanistan Gen. John Campbell earlier said the loyalists of the terror group are attempting to establish a regional base in Jalalabad, the capital city of eastern Nangarhar province.